I want to lure you in my secret garden to ask you to lose yourself and forget everything. To choose for Eros as the life force that overcomes all degradation and despair.

Although these are still images, they appear to be moving, especially the areas where ripples of water reflect the crumpled petals above.  The effect is like looking into a clear pond, where rivulets of pure water descend from glacial protrusions.

Growing up in a family that looked perfect and beautiful from the outside, but was also dealing with psychoses, suicide and war syndromes, so the story of Eros and Thanatos became important for her work. Being a child in an industrialist family in which there was a great love for art, music and literature from all over Europe influenced my passion for making beautiful images. Margriet was surrounded by entrepreneurs, but the demise of the early capitalists’ factories and subsequent bankruptcy during her childhood often led to family tragedy. Despite the vagaries of financial crises, Margriet remembered there was still a lot of joy and celebration of life and positive energy. She grew up surrounded by the intense experience of both emotional highs and lows. This dense, culturally rich childhood gave her a bountiful, albeit turbulent background in which the pleasures afford by wealth were eroded by economic calamity.

In the early 1990’s she became known as a photographer of family portraits, using herself and her family as models. She photographed far from perfect moments, capturing times when the family experiences life behind closed doors. She not only depicted crying children, scenes of jealousy or illness, but also placed flowers in these domestic theatres. For her they represented hope and a bulwark against the memory of and fear of death.

In some ways, the domestic theme has become deeper and more resonant, in that she often refers to Greek myths, many of which are replete with instances of fratricide and revenge. Instead of depicting potential intense emotion in the modern family, in images such as Nausicaa and Demeter she refers to ancient tales of love, rivalry, jealousy and bloodshed using abstract imagery.

Margriet Smulders agrees that her work acknowledges the Dutch Golden Age of painting but her photographs are not intended as Memento Mori, exhorting us to behave well. Her images are insistently about life rather than death, and their unruly fecundity is what makes them compelling. Smulders wants the viewer to abandon themselves in looking, and like Baudelaire she wants her work to insist that ‘you always have to be drunk’.

Like a new lover, these images offer the potential of something astounding about to happen, experiences that you’ve always longed for. Paradoxically, they also arouse desire that can never be consummated. They almost turn the eye into an organ that could taste and gorge on these delicious images. But the eye can’t lick or chew, so we can never get enough of these velvety, purple irises, the ragged orange tulips and crumpled lips of full-blown petals. Smulders’ potent images are full of potential for imagining ourselves into these seductive landscapes. We could get lost; there is so much to see. They must be seen in the flesh, however, to know how beguiling they really are. But beware; they are perilous because looking at images so beautiful makes it hard to walk away.

Smulders’ images are like visual oxymorons, capturing both the effect of movement and stillness, disorder and formality, still life and landscape in a single frame. 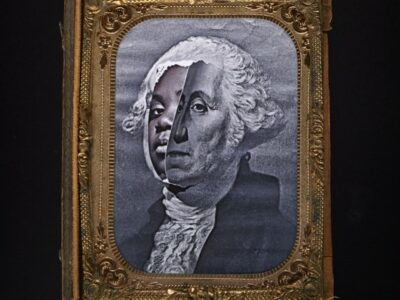